Packet Broker is an open, global platform for exchanging LoRaWAN traffic across networks.

By The Things Industries

The Things Industries is launching global peering of LoRaWAN® private and public networks to a simple internet exchange for IoT, including an optional data marketplace for high-value networks realizing the next potential of LoRaWAN. The new peering service is called Packet Broker and was announced earlier today at The Things Conference in Amsterdam followed by a demo where messages from one network were routed from one network server to the other. 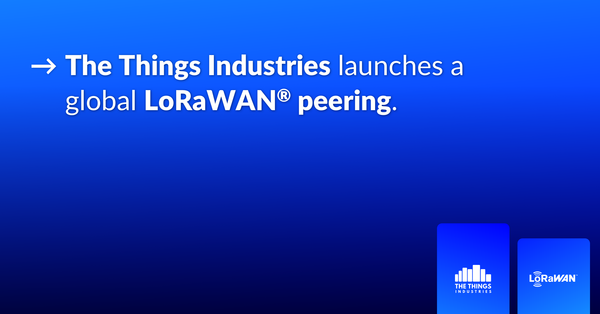 LoRaWAN is an open protocol for secure messaging between devices and networks, typically leveraging LoRa modulation in the unlicensed sub-GHz spectrum for low power wide area networking (LPWAN). In LoRaWAN, gateways providing network coverage are transparent; they forward packets from the LoRa concentrator over the internet to the network server and back. Gateways do not know devices: they forward everything they receive on the channels they are listening on.

Unlike cellular technology in the licensed spectrum, many LoRaWAN networks use overlapping channel plans in the shared spectrum. Since gateways forward all packets, networks receive packets from all devices covered by their gateways, even packets intended for other networks. This gives the LoRaWAN ecosystem the unique opportunity for exchanging traffic between networks: once a packet is received by a gateway, the cost to forward the packet to the device's home network is near zero.

Packet Broker is built around the following concepts that address 5 challenges operators to route traffic from one network to the other:

Keeping open standards, exchanging traffic via Packet Broker is standardized, and any operator or solution provider can build their specification on top of it. This makes it easier to do early validation, both from a technical and business perspective. With open API's and documentation, the aim of the Packet Broker is to make packet-based traffic exchange in the LoRaWAN ecosystem by contributing to the standardized LoRaWAN Backend Interfaces. Vendors can gradually adopt Packet Broker specific functionality like individual packet selection.

When using an open spectrum we are using common ground and it is our duty to make use of it as effective as possible. The Packet Broker is a great tool to make sure the battery lifetime of devices is extended, the network spectrum is used efficiently and overall network health is increased. Just by enabling what LoRaWAN is made for, building a Wide Area Network with LoRa.

Learn more with the presentation of Johan Stokking during The Things Conference:

How can we help you?

We've got your message! We will get back in touch with you soon.